Post your own review  (it will appear in 24 hours)

Home page  my background   synopsis of chapters   order   contact me

There is a need to present to the average reading public an overview of the science and theology dialogue now being carried on only at a very academic level. Dr. Turell has written a review of the field of the interaction of science and religion, for high school level readers who want or need an introduction to this area of intellectual discourse. Although it covers contributions from both secularist authors and also scientists who believe in God, Turell does, however, like John Polkinghorne and Richard Swinburne, conclude that the past 150 years of science logically prove the existence of God. Turell uses the method in Mortimer J. Adler’s book, How to Think About God; A Guide for the 20th Century Pagan, (1980) proposing to prove the existence of God ‘beyond a reasonable doubt.’

After describing his own background, explaining why he wished to write the book, Turell presents a review of the current adversaries in the ‘war’. A simple view of the cosmology of the universe is described in the Chapter, Our Designer Universe Fine-Tuned for Life. After understanding that the universe allows life, the reader is introduced to the scientific research difficulties in determining how life might have gotten started naturally from inorganic matter. The fact that evolution occurred is strongly supported, as a direct answer to the contentions of ‘young earth’ creationists. However, all of the problems with the Darwin Theory, especially the controversies between Darwin scientists, for example, the marked differences between Simon Conway Morris and Stephen J. Gould, are reviewed.

In the chapter, Our Hat Size is too Big for Darwin, is the presentation of the issue as to why should a species appear with such a massive intellect, not really required by nature for survival? There follows a discussion of consciousness, and the philosophic problem of recognizing that somehow ‘mind’ appears out of matter. This leads naturally to a discussion on near-to-death and out-of-the-body phenomena and university level research into psychic phenomena. Turell concludes with his reasons for believing in the existence of God, and then discusses applications of this decision, for example’ how to teach Darwin in the public schools indicating all the problems with his theory.

Dr. Turell is a retired internist, who was in medical practice for over 30 years. After all of his scientific education he became an agnostic, but unsatisfied with that philosophic position, he spent over two decades reading more than 100 books, innumerable articles in scientific and lay journals and magazines before reaching his conclusions. This book really represents an autobiographical review of his research.

A VERY WORTHWHILE AND THOUGHT-PROVOKING READ

I find Science vs. Religion is a very worthwhile book. It is chock full of scientists’ 20th Century findings and philosophers’ up-to-date thoughts about the universe, life, intelligence and how all this bears on whether God exists.

If readers aren’t interested in this subject matter, they must be wholly without curiosity.

The argument for the existence of God that struck me as the most convincing (page 122) is the finding that the human brain grew four times larger during the 2.5 million years it took for hominids to become humans. This cannot be attributed to Darwinian gradualism. We had no need for so large a brain so soon. Why did our brain, and only ours, grow so relatively fast? Maybe there is a God, a playful one.

On the other hand, it is argued on page 183 that "if a first cause was caused, then it could not be a first cause. It must be God". I’d say it must be an "Occam’s Razor" issue, as the Razor is explained in the book, with no need to evoke God as a deductive explanation. The "Big Bang" may simply be the "Big Bang", having no cause, not requiring the invention of an explanation.

I like the book’s "argument from consciousness" (page 206), that "we are aware that we are aware," and we have the intellectual capacity that might help us duck another asteroid like the one that killed off the dinosaurs and might later move to another hospitable solar system before our sun dies. Our helpful God at work again?

All this is every interesting and thought-provoking, and I’m for it. The book is great. I’ve enjoyed reading it and thinking about it, and I’ll probably use it as a reference for years to come.

Yet I remain an agnostic, one who respects believers but who can’t ever quite make it into the fold.

Part of my trouble is that I don’t understand what good it does anyone for me to hold a set of beliefs concerning God. Morals and ethics, yes, but not God Himself. I can only speculate as to whether He exists and if so, why?

Dr. Turell's book resonated with me because it crossed many trails I have pursued myself in terms of its reflection on the foundations for God's existence and presence in the world, while adding the personal perspective of the author on his own search for spiritual comfort with the Designer. I have been a fan of Mortimer Adler, whose philosophical approach to God Turell borrows, for many years and have monitored with interest the arguments of the proponents of intelligent design and the anthropic principle, as well as the explanations of the deficiencies of Darwinism as a final theory. Dr. Turell weaves all these threads together with a personal touch, and provides some suggestions for compromises in certain aspects of the cultural war that have merit as well as some helpful tips for other pilgrims. A very worthwhile addition to the dialogue to which I am sure to return.

Although he grew up as a believing Jew, when he went to medical school Turell, now a retired physician, came to believe that science would eventually provide all the answers to questions about life and the universe. Over the years, he came to recognize that religious faith and scientific teaching are compatible and that many of the discoveries of modern science actually enhance faith. His book aims to persuade people that modern science can be used to support a belief in God. Among his topics are the Big Bang, evolution, and near-death experiences. The value of the book lies in Turell's summarizing many of the arguments of other authors on both sides of the issues, as presented in books, articles, and even web sites, in a way that does them justice. More serious readers will want to consult the works of the authors Turell draws from, such as Stephen Jay Gould and Paul Davies, but this is a good starting point for someone looking for a popular presentation of the discussion on a personal level. Purchase where warranted. Augustine J. Curley, Newark Abbey, NJ Copyright 2004 Reed Business Information. 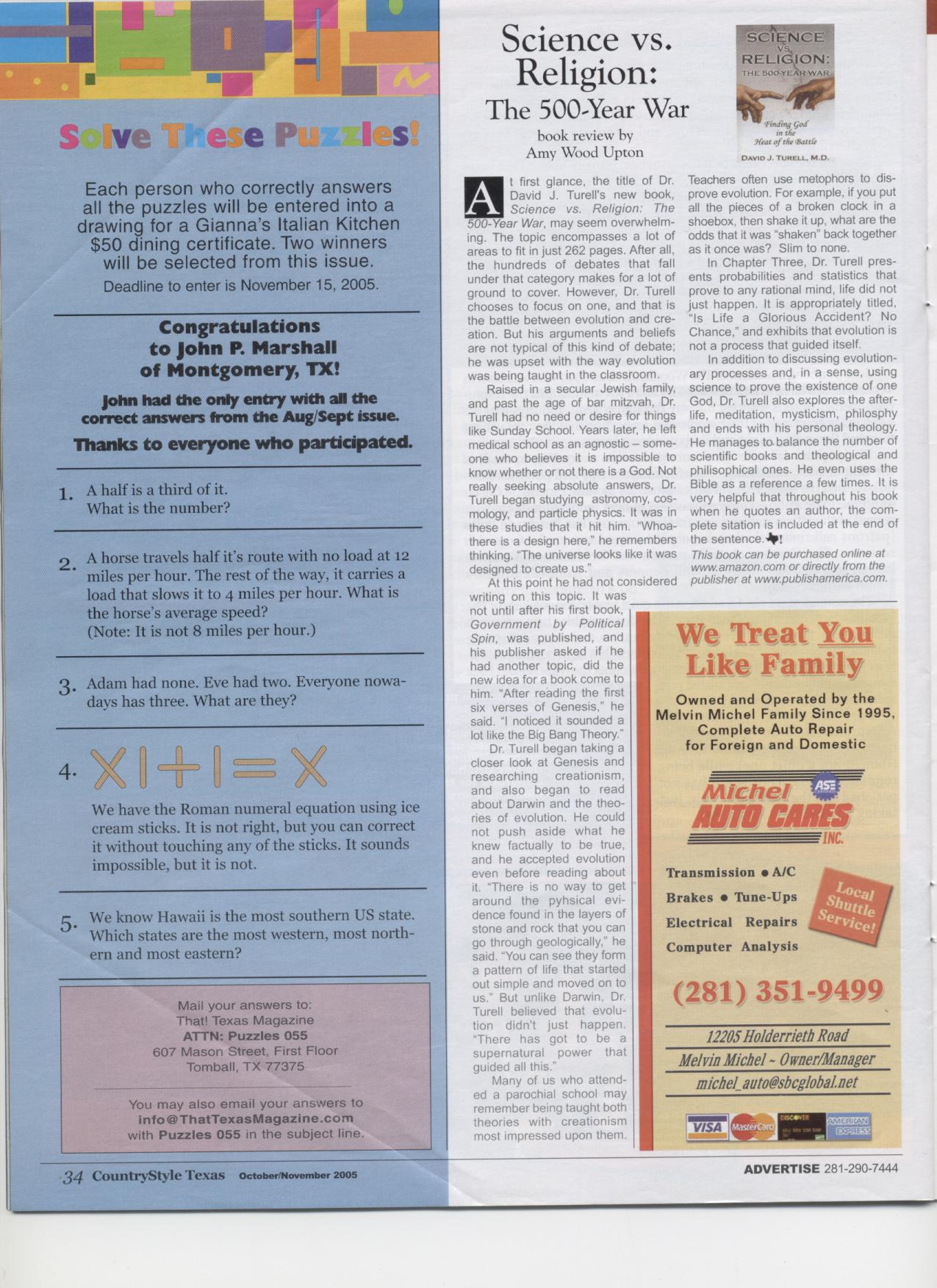 Science Vs. Religion is friendly, not ponderous

Doctor Turell writes in a profoundly engaging and intellectually playful way. The tone of his approach to SCIENCE vs. RELIGION is friendly and collegial, not ponderous. This tone is a key to the success of his book. However, Turell also comprehensively, accurately, and carefully reviews the serious scientific, philosophical, and theological literature that bears on his topic. By the means of presenting and synthesizing a depth and density of facts and data, Turell brings the reader steadily to contemplate his compelling and profound conclusions.

Dr. Turell is candid about his personal journey in search of God that entwines with his writing of this book. This personal investment of energy enlivens Turell’s creative work. Lets examine how Dr. Turell proceeds with his journey that becomes our journey as his readers.

Chapter 1 (Enemies or Helpmates) frames the key elements of a respectful, honest and productive debate between Scientists and Creationists. Turell’s quote of Pope John Paul II, sums it up beautifully: “Science can purify religion from error and superstition, and religion can purify science from idolatry and false absolutes”. Chapter 2  (Our Designer Universe Fine-Tuned for Life) summarizes the fascinating findings of astronomy and cosmology of the 20th century and beyond. There are “Big Bangs” and big chemical events described as Turell concludes that only the God of “Intelligent Design” could have programmed a safe place for our existence. As usual he presents views to the contrary fairly. Chapter 3 (Is Life a Glorious Accident? No Chance), visits the intensely conflicted and often misunderstood and misrepresented world of Darwin’s ideas. Roll-up your intellectual sleeves for this encounter!  Chapter 4 (Is The Evolution of Humans a Glorious Accident?) takes us deeper into the Darwin trek by information-dense discussion of the implications of recent findings from geology, archeology and the implications of DNA for human evolution. Turell makes no excuses for complexity in our destiny and its religious implications. Chapter 5 (Our Hat Size Is Too Big for Darwin), gets into the implications that our large brain size, language development, and consciousness/self-consciousness has for transcendent religious experiences as a reflection of God’s presence. Hold your hats for this discussion! Chapter 6 (Hallucination or Glimpse of the Afterlife?) soars into the fascinating territories of Near Death Experiences and Out of Body Experiences. Turell carefully presents distilled data from many sources about these spiritually enlightening and conscientiously documented medical phenomena. Dr. Turell follows the trail left by the implications of these unusual forms of human conscious experience. Does he jolt you with this conclusion? “My guess is our life-after-life is not somewhere else. It is probably right here with us. Generally, in our three dimensional form, we are not aware of it, but my theory suggests it is not difficult to cross over and come back at the quantum level, since quantum particles can be in two places at the same time.” (p171). Chapter 7 (Belief in God Through Rational Philosophy) is a scholarly and penetrating journey that integrates Turell’s previous discussions of the design of the universe and ourselves with the implications of our Consciousness that leads to the conclusion that God exists. Competent philosophers and theologians would respect this chapter regardless of their conclusion about the existence of God. Chapter 8 (Reflections on a Personal Theology) is a gem because Dr. Turell expresses his personal convictions and conclusions with the same candor and collegial tone that characterizes the entire book.            For the reader who stays attentive to the information and relentlessly persuasive synthesis that Turell provides, there will be rich personal rewards